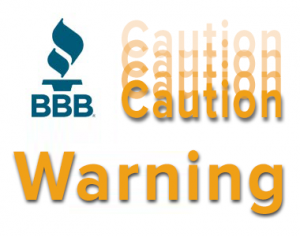 After the Better Business Bureau’s over 100 year history of helping consumers there credibility was called into question in 2010 when ABC 20/20 broke a story of a pay to play scheme in which A plus ratings are awarded to those who pay membership fees, and F ratings were used to punish those who don’t.

It is important to know the Better Business Bureau is not a government agency and has no enforcement powers. Despite that, often the BBB is labeled as a consumer watchdog organization but the truth is the BBB is not.

The term accredited may be confusing to consumers. A business can only be called accredited if it pays a fee. The fees start at around $300.00 annually and go up from there. An accredited business must meet the standards set by the Better Business Bureau. It is also good to know the local BBB’s are funded primarily by the accreditation fees.

In 2001, the Hon. Corrine Brown of the Florida House of Representatives, wanted to alert Congress about the Better Business Bureau. Hon. Brown stated “Unfortunately, I have learned that we have within our country a private organization that with the appearance of being quasi-governmental and without any legal or regulatory oversight and control can libel and slander and tortuously interfere with a small business. They can do so with virtual immunity. This organization is the National Better Business Bureau and their franchised local Better Business Bureaus. At times, some of these bureaus classify small business owners as unsatisfactory, libel and slander them with opinion and innuendo, and provide them no due process to correct the problem. If sued in court, they argue qualified immunity under the guise of the public good. No one disputes the right of a Better Business Bureau to print facts. It is when they print falsehoods, opinion, or negative innuendo that a mechanism for redress or correction must be assured. When closely examined, however, one finds that there are Better Business Bureaus that arbitrarily and capriciously exclude and negatively classify those they don’t like. They also frequently rate companies with terrible records as being satisfactory. No written guidelines or rules are available that require the Better Business Bureau to adhere to any legal standard in their dealings with business.”

In the 2010 ABC 20/20 news report a group of business owners paid the membership fee of $425.00 to the Better Business Bureau for a made up company called Hamas, named after a Middle Eastern terror group. Because of the payment of $425.00 for the BBB membership Hamas was given an A minus rating.

At the time, Robert Blumenthal was the Attorney General of Connecticut and stated “Right now, this rating system is really unworthy of consumer trust or confidence.” In a demand letter to the BBB, Robert Blumenthal who is no longer the Attorney General, but is now a U. S. Senator wrote; “potentially harmful and misleading to consumers” and asked them to no longer use the current grading system.

At the time the National President and CEO, Steve Cox stated “the A minus grade for Hamas was given in error. “Plain and simple, we made a mistake,”

It seems mistakes were happening more than once. An anonymous blogger reported the BBB awarded him an A minus rating to a made up sushi restaurant and an A plus to a made up company called Stormfront that is a neo-Nazi web site.

In the 20/20 ABC story there were other instances where other company owners paid the membership fee and the grade was raised above a B plus.

Many people may be asking the question today, has the Better Business Bureau changed much since the 2010 news story? The National Investigative Report tried to get the BBB to answer questions but they refused.

NIR looked over hundreds of profiles on the BBB web site and found all the companies who paid a membership fee had an A, A plus or A minus rating. Only a few had less than 100 complaints. But a few companies had more than a hundred complaints. Liberty Mutual Group had 1321 complaints over a three year period and Travelocity had 1556 complaints and has an A plus rating. The Sparks Network Inc. had 118 complaints and has an A plus rating. But after checking the profile again, they are no longer a member and have No Rating. It seems, if you pay for a membership you will get an A or better rating. Has the BBB changed since the 2010 news report? It seems not.

There are good grades for some companies who are not members. Most have a B rating or above. There are a lot of non-accredited members who have bad ratings with the Better Business Bureau. Most of them have a few complaints. There are also a lot of companies with F ratings because they chose not to deal with the BBB. The BBB will send out a questionnaire for the company to fill out. If the company does not fill out the questionnaire the result is a bad grade. If a company receives a compliant from the BBB and the company chooses to not respond, the BBB will give them a bad grade. Many people question this because no company is required by law to answer any complaints or fill out the questionnaire. Even though the Better Business Bureau is a nonprofit with no enforcement powers, they seem to justify the bad grade. One employee of the BBB stated “If you’re a legitimate company then why would you not fill out the questionnaire or answer complaints?”

There are many other web sites who rate companies and allow consumers to leave reviews such as Angie’s List, Yelp, Consumer Complaint Agency, and PeopleClaim.com (Jaci Group Inc.)

The company has; however, agreed to remove the false claim that they are a member of the Better Business Bureau. JACI also admits that they use “BBB” as tag words for articles that do not mention the BBB, but state, “the tags appear to be related to a blog post that references the BBB but which has been delayed pending receipt of permission to quote a well-known business source on their experience with the BBB.” Upon further investigation, the BBB has discovered that People Claim.com frequently embeds the metatags “BBB” and “better business bureau” into their URLs. This tactic may be construed as a deceptive means of drawing traffic to their site.”

This would further call to question the credibility of the Better Business Bureau. National Investigative Report feels the BBB has changed little since the 2010 news report. NIR had hoped for the BBB to respond to the many questions NIR has for them but the BBB was advised by its attorney not to. NIR hopes the BBB will change its mind and provide information and respond to the news report.

National Investigative Report did a survey and the following are the results:

National Investigative Report will keep a close eye on the Better Business Bureau and bring updates as they develop.

National Investigative Report would like to know what you think about this news report.

HISTORY AND MEANING OF THANKSGIVING

One of the oldest festivals celebrated throughout the history of man is Thanksgiving. There were instances of ancient tribes preparing…

The Ugly Truth About The Better Business Bureau Scandal

15 Replies to “Is The Better Business Bureau’s Credibility Still At Stake?”