The Hawaii Country Civil Defense officials have now confirmed that lava flowing towards Pahoa, a community in Hawaiian has started to cause damages to properties as it took down one house in flames. It is being reported that the lava was flowing at a speed of around 15 yards per hour and came in contact with a house that was on the Cemetery Road. One of the people who live in that house was present at the location while the house was on blazing fire. The person travelled from another side of the island and drove to Pahoa, only to witness that his house was on fire. 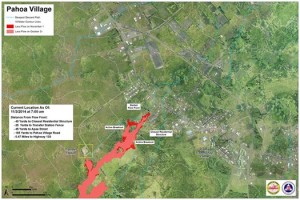 The house covered around 1100 square feet. The house was located less than a mile from the neighbors, the neighbors being located in the agricultural area of the town. This distance between the neighbors ensured that the property damage was only limited to the house. Moreover, the neighborhood has been empty for more than 3 months as well. This is mainly because the evacuation started to take place earlier and the people started fleeing to other parts. The lava has started to flow ahead of the house after taking it down, and has already covered two feet to reach a barn.

The lava flowing towards Pahoa has been a huge concern although since it has less than 500 feet to cover in order to reach the main Pahoa Village Road. The officials’ report regarding lava has further added to the concerned stakeholders since they have claimed that it does not seem likely that the lava would stop flowing in the near future. The state officials have been busy doing their jobs which is to close down Highway 130. Highway 130 holds significance since it has the potential to stop the lava flow. It the lava flow continues, this Highway 130 would have to be cut off. This should trouble the natives as it is the main route through which other towns are connected.

CUSTOMERS SAY RED BULL DID NOT GIVE THEM WINGS

Red Bull has used the slogan, “Red Bull gives you wings” for more than two decades but after a class…

HISTORY AND MEANING OF HALLOWEEN

When we try to find answers about the history of Halloween, we need to trace back to the period of…

2 Replies to “Lava makes its first property damage in Pahoa”